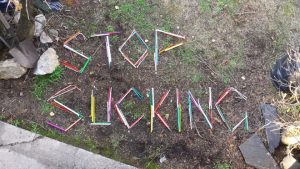 Even though, according to the Environmental Protection Agency, 75% of what we put in our trash cans is recyclable or compostable, Baltimore’s recycling rate is a measly 14.7%.

We get a five-point credit for burning our trash at Wheelabrator. So technically, 19.7%. Yay.

To make matters worse, in 2016, Baltimore City provided everyone a massive, 65-gallon trash can. While this did decrease the rat problem, it suggests that most of what we throw away should be in a trash can. And that’s false.

But instead of providing recycling bins too, Baltimore City keeps charging for puny 18- ($5) and 25-gallon ($12, $15 with a lid) recycling bins. Insanity!

First, we pushed for the city to give those small bins away for free, but government officials balked at the idea that this would increase recycling rates. So we set out to prove them wrong!

Last summer, Energy Justice Network received funding from the local Abell Foundation to run a new pilot program, branded as “Westport, Mt. Winans, and Lakeland Recycles.” This pilot would provide temporary jobs to five residents,  homes with 44-gallon recycling bins, and offer educational workshops about the importance of recycling versus incineration and landfilling.

Within the community, some residents were reluctant to answer a random door knock. Others shared resignation to the idea that Wheelabrator is here to stay. This was understandable, as it has been in the community for 34 years. These two factors made recruitment slow and difficult. Instead of kicking off by August, we began in mid-October.

We recruited nearly 100 homes for the 12-week pilot. We also hired five residents, known as Block Captains, to collect the data. In the first month, the Block Captains weigh trash cans to get an average of how much trash each home produced weekly. At the end of Month 1, we held two workshops on the history of Wheelabrator, its dangerous health impacts, and our solutions for a better future. (This information was also provided to Block Captains before the program began.) We also distributed free, 44-gallon yellow recycling bins, about 70% the size of a green trash can, and brochures listing what is and isn’t recyclable. For the last eight weeks, Block Captains would weigh both trash and recycling bins the days before pickup. 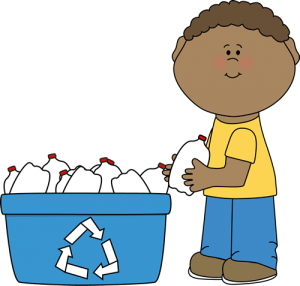 By the close of the first pilot  in January 2018, our 95 participating households recycled nearly 4 tons of materials in 2 months.  Overall, Westport residents recycled 82% more per household per week (~10.2 lbs.) than the weekly household average in Baltimore City (~5.6 lbs.).  If everyone in Baltimore recycled this much weekly, the city would keep over 54,000 tons of plastics, glass, paper, and metals out of the incinerator in one year.  We could pay back the cost of giving away 25-gallon bins for free  in under two years!

Although the two workshops we held had the common level of turnout to most community events (read: low), those who did attend the workshops recycled 157% more per household per week (~14.3 lbs.) than non-attendees. So, if everyone recycled at their rate, Baltimore City would recycle over 76,000 tons in one year! This shows that education can change behavior and help clean our air. And at this rate, the city could pay back the cost of free 25-gallon bins in under 16 months!

The top five homes by weight recycled received from $400 to $1,200 – two homes tied for fourth, so we gave them both $400! These personal incentives were to express our appreciation for participating in our program, but also to assist families in an environmental justice community that has a 35% poverty rate.

After the success of Westport Recycles, we are acquired additional funding this summer to expand into Cherry Hill. This time, we’re going to provide 50-gallon rolling bins, which are about 77% the size of the city trash cans. We aim to hit a 40% recycling rate – nearly three times the residential recycling rate.

Eventually, we want to expand into neighborhoods nearby like Curtis Bay, and farther away from the incinerator, like Park Heights. Once these have been completed, we want to shift to a collaboration with Baltimore City, providing bins for free to a community and setting a target recycling rate. If the community does better than that rate, it will be rewarded with funds that would’ve been used to burn their trash. That fund can be used however the community sees fit – more greenspace, more streetlights, fixed potholes, et cetera. It’s trash to treasure!

Once the program is citywide by 2021, the need to keep Wheelabrator around for much longer will continue to decrease. This increase in materials no longer being burned also increases the demand to build recycling and composting facilities throughout the city. What does that mean for Baltimore? Cleaner air and more jobs!