Based on data reported to the Maryland Department of the Environment, this is where trash burned at the Wheelabrator Baltimore incinerator came from in 2019.

188,785 tons of ash was generated and disposed of in 2019, which means that for every 100 tons burned, 28 tons of ash remain to be landfilled. The rest becomes air pollution. Of the ash, 69% was buried in the city’s Quarantine Road Landfill, and the rest in Baltimore County’s Eastern Sanitary Landfill in White Marsh.

90% of the waste comes from the city and county.  In November 2020, the city and county settled lawsuits with Wheelabrator by awarding them new long-term waste contracts.  The Baltimore County contract is for six years with a put-or-pay guarantee of at least 215,000 tons/year.  The Baltimore City contract is for ten years with no put-or-pay clause, and comes with an ash disposal agreement for use of the city’s landfill and an emissions control agreement for partial compliance with the Baltimore Clean Air Act. 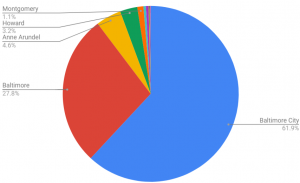