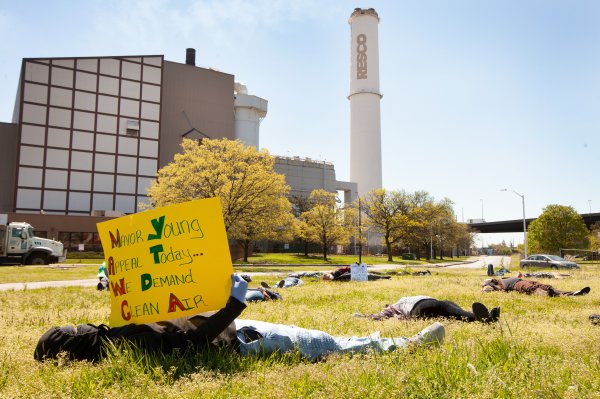 After years of ground work, legal work, and several resolutions lining up council support, we won the unanimous passage of the Baltimore Clean Air Act by City Council on February 11, 2019. Then-Mayor Pugh signed it into law on March 7th, 2019. In late 2018 and early 2019, then-Council President Jack Young and then-Mayor Pugh accepted $500 and $1,000 campaign contributions from Wheelabrator and both tried to quietly kill the bill, but couldn’t stop its momentum and ended up supporting it. Mayor Pugh’s fall from grace in a corruption scandal resulted with her resigning on May 2, 2019, to be replaced with the unpopular Mayor Young. The law would have forced the city’s two large waste incinerators to meet the most protective air pollution standards or (more likely) close down. This includes the city’s largest air polluter, the 2,250 ton/day Wheelabrator Baltimore (“BRESCO”) trash incinerator, as well as the nation’s largest medical waste incinerator, Curtis Bay Medical Waste Services, which accepts medical waste from about 20 states plus Canada.

In our campaign to pass the Baltimore Clean Air Act, Wheelabrator (Baltimore’s #1 air polluter) sent many desperate mailings to residents to lobby against the law, saying that “the Clean Air Act is not a solution.” Find our responses to Wheelabrator’s lies here.

Leading up to the passage of the Act, Wheelabrator threatened to sue the city, using legal arguments that the city’s Law Department described as “demonstratively false.” In late April 2019, Wheelabrator, Curtis Bay Energy, and two industry trade associations sued the city claiming that the city doesn’t have the authority to pass such a law, even though federal and state law clearly permit it.

While the city’s legal case was strong, the federal court ruled on March 27, 2020 to strike down the city law because it conflicts with state law, as if being stricter (which is authorized) is a conflict. The city prevailed on 6 of 11 claims, including due process and equal protection, but the polluters prevails on all 5 preemption claims, four of which are specific to Maryland — and all of which were decided improperly, with a contorted interpretation of the law. Check out the filings in the lawsuit, including our advice to the court.

Under Mayor Young, the city dragged its feet and had to be pressured to file an appeal within the 30 days allowed. We and our allied groups and residents sprang into action, got city council to unanimously pass a resolution on April 6 urging an appeal, and we held a die-in on the 50th anniversary of Earth Day (April 22, 2020) in front of the incinerator to force the issue. As we left the die-in, we learned that Mayor Young did move forward with an appeal – only to begin backroom discussions with Wheelabrator shortly thereafter. We caught wind of this in July 2020, just before an initial deadline to reach a settlement was approaching. Subsequently, we and our allied groups blocked the entrances to the incinerator for two hours, demanding then-Mayor Young not settle the legal appeal. The rights of all local governments in Maryland to adopt clean air laws hung in the balance. City council passed another unanimous resolution in August urging the city not to settle. Council members and candidates weighed in individually as well, including Councilmember Clarke and City Council candidates (mostly those from District 10, where both incinerators are located). See the statements from candidates Natasha Guynes, a joint letter with candidates Guynes, Bob Cockey, Ray Conaway, Kerry Hamilton & Bill Marker, a separate letter from Phylicia Porter, and this Baltimore Beat Op Ed from Keisha Allen; also Carl Stokes in his race for council president.

As the lawsuit settlement deadline kept getting pushed back, we got a new bill introduced in city council by Councilmembers Mary Pat Clark and Ed Reisinger: the “Ban the Burn at Every Turn Act.” With excellent support from City Council’s legislative drafters, it was a strong bill. We got 58 groups signed on in support, and struggled to get the bill put in a favorable committee, but sadly, it was placed in Councilman Costello’s committee with a promise from then Council President Scott that it would be brought to a vote. Getting down to the wire in the last months of the Young administration, politics were complex and precarious. Costello and Stokes attacked us in the hearing on our bill. Acting City Solicitor Dana Moore repeatedly lied during the 5.5-hour hearing and joined the Finance Office and DPW in attacking our effort to pass this legislation that would put in the City Code a provision to prohibit new contracts to burn Baltimore’s waste. The misinformation was extreme, and the political promise of a vote on the bill was broken.

In the days before and after the Biden/Trump election, everything came crashing down. The day before the election, the Northeast Maryland Waste Disposal Authority approved new agreements with Baltimore City to keep the city burning trash at Wheelabrator for another decade. The same day, Baltimore County settled a separate lawsuit from Wheelabrator over the county not sending enough trash under their “put or pay” contract that promises a certain amount of trash to the incinerator. In settling it, the county signed a new six-year contract with the same problematic “put or pay” clause. The day after the election Baltimore City’s approved the settlement in the Baltimore Clean Air Act suit, and granted a ten-year new contract to keep burning at Wheelabrator instead of allowing the contract to terminate at the end of 2021. This contract extension violated city policy by not even allowing competitive bidding and acting city solicitor Dana Moore dodged service of the emergency lawsuit filed by two councilmembers and a waste company that wasn’t given the opportunity to bid and proceeded to lie to the Board of Estimates and vote in the narrow 3-2 decision to contract for continued incineration. Baltimore County’s new incineration contract was also in violation of competitive bidding requirements.

The settlement agreement resulted in the city signing two agreements with the Northeast Maryland Waste Disposal Authority for continued use of the Wheelabrator Baltimore trash incinerator for ten more years, as well as an emissions control agreement with Wheelabrator to come half-way to the requirements of the Baltimore Clean Air Act. So far as we know, no agreement was made with the Curtis Bay Energy medical waste incinerator to require them to reduce emissions. The agreements are:

Compliance with the Baltimore Clean Air Act would have cost Wheelabrator $95 million and forced their closure. Due to our pressure, the settlement agreement included an emissions control agreement that meets Wheelabrator half-way. The trash incinerator will now have to upgrade the incinerator’s pollution controls at a cost of $40 million by the end of 2023, reducing emissions of the nitrogen oxides that trigger asthma attacks. Fortunately, the new contract with the city (unlike the county) has no minimum commitment of waste, allowing for waste reduction, recycling and composting to be maximized. It also has a provision that can enable the city to get out of the contract without consequence by passing a policy that affects the incinerator more than other entities in the city, if the incinerator chooses to close in response.

Baltimore has some of the most dangerous air to breathe in the nation. MIT researchers showed that Baltimore City had the deadliest air in the nation in 2005. According to EPA, in 2014, Baltimore was the 81st most air polluted locality in the nation (out of over 9,000) and is the most polluted city in Maryland. In 2018, the Asthma and Allergy Foundation of America ranked Baltimore as the 33rd worst asthma capital in the nation.

This law we’ve been working on would force the city’s largest air polluter (the Wheelabrator Baltimore trash incinerator) and the nation’s largest medical waste incinerator (Curtis Bay Energy) to abide by the nation’s strictest standards or shut down. It was in the media a lot. See our news coverage below.

The Baltimore Clean Air Act (see full text here) is designed to raise pollution standards to bring about cleaner air in Baltimore City, targeting 38% of the city’s industrial air pollution. The Clean Air Act will do the following:

General Facts on Incineration vs. Landfills and Zero Waste

If your group isn’t signed on, you can sign on here!

The bill also has the support from the Baltimore City Health Department, the Law Department, and the Commission on Sustainability and a statement of no objection from the Environmental Control Board. The Law Department called comments by Wheelabrator, threatening to sue the city, and arguing that the law is illegal, “demonstratively false.”